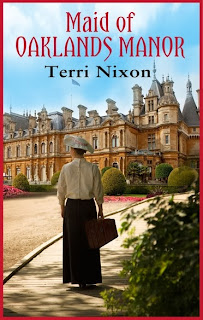 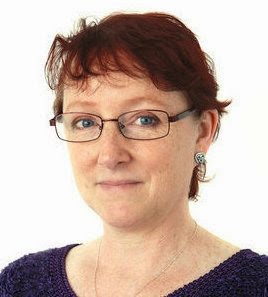 Hello Terri! Now, like me, you are a fan of the wonderful Downton Abbey – from a writing point of view, what is it you like about the series – the characters, plotlines or setting…?

I think it has to be the characters; without them, all you have is a big, beautiful, but empty box. Highclere Castle is famously gorgeous, of course, but without the right people to bring it to life it’s just a house, when all’s said and done.  As for the plotlines … well, to begin with they were mostly wonderful, but – although my love of DA hasn’t wavered over time – I think we all know the storylines can get a little bit silly. Which is fine, I love a little bit of silly, me! But now and again they do stretch the bounds of believability, don’t they!  Even the first series, with Anna helping Lady Mary carry a dead body down the stairs – if that wasn’t shades of “Fawlty Towers” (and a definite breach of upstairs/downstairs etiquette,) I really don’t know what is! Fun though. Definitely fun.

And which character would you like to be able to take the credit for creating, and why?

I think the Machiavellian Thomas is the most interesting at the moment, and has been most of the way through, in fact. Despite his devious nature and seemingly irredeemable nastiness, now and again he shows flashes of courage, and – dare I venture – vulnerability. He’s obviously got a chip on his shoulder the size of Ripon, and I’d like to know what put it there. Most of the others are a bit black and white, they show a bit of a mid-shade now and then, but we know whether we’re supposed to like them pretty much from the outset. I think Thomas is the most complex, and I’d like to have written him because to have the power to attribute his nastiness to something in his past, and perhaps to redeem himself one day, would be wonderful.

I really can't bear Thomas and wonder if he truly has any redeeming qualities... But something must have made him the way his is. I wonder if we'll ever find out what...
Out of all the characters you have created, which is your favourite?
Ooh, now THAT’S probably the hardest question I’ve ever been asked! I suppose at the moment it would be the hero of my self-pubbed series, The Lynher Mill Chronicles. His name’s Richard Lucas, and he’s troubled, passionate, funny and courageous, and a little bit dangerous, although he doesn’t acknowledge that side of himself and just wants to live his life quietly.  But he’s got a shadowed past that won’t leave him alone, and when he’s forced to deal with it things get very dark, very quickly. And, of course, he’s sex on a stick!

Why do you think Downton Abbey has become so popular and when writing do you consider your target readers and consciously try to make the book appealing to them?

Downton Abbey filled a niche we probably didn’t even know about. (Now, of course, I’m going to have to do my usual; “I wrote my book first,” thing!) When I began writing the book that was to become Maid of Oaklands Manor, there was very little around, in the way of new work, focused on the era immediately prior to WW1. By the time I’d finished my first draft Julian Fellowes had announced Downton Abbey, and by the time it was edited and pitched, the country had gone mad for the era. I’ve been playing catchup ever since! Now we have the centenary memorial coming up, and although Downton moved on (rather too quickly, for my taste) it still maintains that feeling of another age. We’re now heading for Gosford Park times, and that was politically unsettling too - there are people who will remember that era, so it will remain relevant, I think.
As for the second part of that question, of course anyone writing with a target audience in mind must consider them at every step. I hadn’t planned to write a romance, but the love story was central to the plot, and when Piatkus picked it up they encouraged me to explore that side of it. Now when I’m writing, in the back of my mind is Caroline Kirkpatrick’s urge to let my characters “spend more time on the page together.” And blow me down if, when they do that, they don’t start to sizzle a little bit!

What is your writing fantasy, Terri? Mine is to have one of my novels adapted for TV or the big screen.
I think it’s a rare writer who’ll say they wouldn’t want that! So, to start small then, I just want to see my books in paperback, on the shelves of bookshops. To be able to walk into my local Waterstone’s and see my own work on their shelves would be the fulfilment of many many years’ dreams. It’s all very well calling yourself a published author, but without the tangible evidence it sometimes still feels as if I’m playing make-believe. Oh, wait …

Yes, I'd love to see a physical copy of my book in a shop. But assuming you also got that film deal, who would you cast as the hero/heroine (or both) in you latest book (Maid of Oaklands Manor).
Lizzy Parker is very slightly-built, with masses of cloudy dark hair and big blue eyes. I have NO idea who’d play her! Any ideas? Possibly Zooey Deschanel if she could do a convincing English/West Country accent!

Jack Carlisle is quite a bit older than her. He’s tall (of course!) quite strongly-built and has very dark blue eyes and dark hair. I’m thinking of Henry Cavill. Not to play Jack, just generally.  ;) (kidding!)

In the 1970s Julian Fellowes, the creator of Downton Abbey, used to write romantic novels under the name of Rebecca Greville. Would you like to write a different genre under a pseudonym?
I already do. Not much of a pseudonym though, to be fair. I recently revitalised a collection of short, at times extremely graphic, horror stories, which I released free on Kindle at Hallowe’en under the name T Nixon. The Lynher Mill Chronicles (starting with The Dust of Ancients) is not at all like Maid of Oaklands Manor, but it’s got a very strong love story at its heart, so I released that one under my real name. However, it might be fun to go in a totally different direction at some point, and make up a new me! We could have arguments in different accents (see my next answer …)

Fellowes used to do a lot of acting (and was even in Fantasy Island!) Have you any other creative talents?
I LOVED him in Monarch of the Glen! Poor old Kilwillie! Creative talents then … well, I can do accents! While I’m writing I’ll often talk to myself out loud, in a silly accent, and it’s not necessarily the accent of the person I’m writing, it can be quite random (and quite alarming, I should think!) Beyond that, nope. I’ve been in a couple of stage shows, was Ronnette in Little Shop of Horrors once, but I leave that to people who can sing, nowadays!

Carson or Mrs Hughes?
I have sympathies for both. Carson’s desperate to hang on to the old ways, and he often comes across as unbending. It’s nice to see him softening slightly now. Mrs Hughes is so solid and dependable but I’d like to see her break out and do something a bit wild and unpredicatable one day!

Upstairs or Downstairs?
Downstairs, without a doubt!

Dinner with Hugh Bonneville or Maggie Smith?
I think we know! MAGGIE!

Thank you so much for joining me, Terri! I’ll just ring for Carson and he will see you out…!

Terri was born in Plymouth, England in 1965. At the age of 9 she moved with her family to Cornwall, to a small village on the edge of Bodmin Moor, where she discovered a love of writing that has stayed with her ever since. She also discovered apple-scrumping, and how to jump out of a hayloft without breaking any bones, but no-one's ever offered to pay her for doing those.

Since publishing in paperback for the first time in 2002, Terri has appeared in both print and online fiction collections, and is proud to have contributed to the Shirley Jackson award-nominated hardback collection: Bound for Evil, by Dead Letter Press. As a Hybrid author her first commercially published novel was Maid of Oaklands Manor, published by Piatkus Entice (a digital-first imprint of Little, Brown,) and short-listed in the "Best Historical Read" category at the Festival of Romance 2013.
Terri's self-published Mythic Fiction series: The Lynher Mill Chronicles has now been launched, the first title of which is The Dust of Ancients, available in e-book and paperback.

Terri now lives in Plymouth with her youngest son, and works in the Faculty of Arts at Plymouth University where she is constantly baffled by the number of students who don't possess pens.

Why not buy Maid of Oaklands Manor!