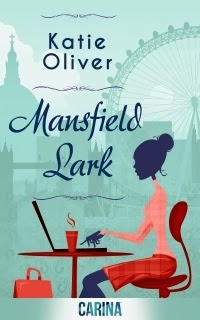 Hello Katie! Great to see you here. Now, like my debut novel Doubting Abbey, Mansfield Lark (blurb at end) features a rundown stately home - can you describe it to us and explain why it is verging on ruin?

When the story begins, Mansfield Hall is in serious disrepair.  The carpets are threadbare, and there are ugly brown water stains on the Robert Adam ceilings; the roof needs repairing, the boiler is on its last legs, and the plumbing is so ancient that only a rusty trickle of water comes out of the spigots.

The Earl of Locksley and his family can no longer afford the upkeep on the sprawling estate.  The family trust that’s covered the costs thus far has all but evaporated.  is a historic home, but it’s not a stately.  His lordship refuses to allow tour groups to traipse through his home, nor will he relinquish it to the National Trust.  He’s a proud and stubborn man.

It’s loathsome to him, then, that he must turn to his rebellious (but filthy rich) son, rock star Dominic Heath, for financial help.

Like yours, my book also features an earl - I loved writing about aristocratic life as it is so different to mine. What was the appeal for you?

Honestly?  I’ve always wondered what it must be like to live in a grand old house.  Maybe it’s because of all the films and television shows I’ve watched – Jane Eyre, Pride and Prejudice, Bright Young Things, “Downton Abbey” – but I pay almost as much attention to the sweeping staircases and carved library ceilings as I do to the plots!

Living in such an immense house is wonderful, surely; but it’s also fraught with responsibility.  For despite the English gardens and follies by the lakes, the long galleries and morning rooms swathed in silk, there is a great deal of expense to be borne.  And, of course, there are future generations of the family to consider.

Would you have rather lived upstairs in past centuries, in a stately home, or kept up to date with all the gossip in the servants' quarters, downstairs?

Well, my initial answer is that I’d like to have lived upstairs.  Having servants to draw your bath and dress you, never being required to fix dinner or mop a floor – that would indeed be wonderful!

But life in those days was so restricted for women, and so circumspect, that I think the reality was probably far from our romantic imaginings.  I can’t help but believe that living below stairs, although certainly much harder, would prove a lot more interesting!

I loved your debut book, Prada and Prejudice. The second in the series is called Love and Liability - and now Mansfield Lark. Presumably you are a massive Jane Austen fan?

Jane Austen wrote books that still resonate with us today, because she understood human nature so well.  She wrote about universal themes – love, family, pride – things that we all relate to.  Her characters, too, are unforgettable.  Is there a more romantic hero than Mr Darcy in all of literature?

But while I love her books, I would never dare to try and “reimagine” them, as other writers have done (and done very well, I might add).  No, I prefer to write about things I observe in my daily life – amusing things, confounding things, frustrating things – and fictionalize them, just as Jane Austen documented the foibles and follies of the people in her own day and time. 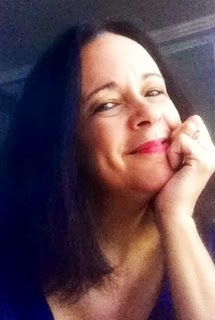 Would you ever consider writing a story set in the past, like hit TV series Downton Abbey, or are you very much a contemporary writer?

I would love to write a Regency romance!  I’ve written (well, half-written) one and it was great fun to write.  I love the comedy of manners, the sharp wit, the history, and the clothes.  The main reason I’ve stuck to modern-day settings is because I haven’t the time to do the meticulous research required to do justice to a Regency.  (Those Regency readers are a tough audience, I hear!)

Out of the three books, which is your favourite character?

Oh, hands down, Dominic Heath, the recalcitrant rock star, is my favorite character, probably because he’s my polar opposite.  He gets to do all of the things I’d love to do – sing rock songs onstage, sling a guitar, behave badly, and plow his way through a succession of women (well, for me it’d be men, obviously).

What is it like being published by a digital-first imprint?

It’s been great, if a little intense.  When my three books were initially bought by Carina back in August of 2013, I had no idea they’d publish them so quickly, and in such quick succession.  From a marketing perspective it was brilliant; but from a personal perspective, since I’m still working full time, it was a bit stressful!

But I’ve loved every crazy minute.  Carina’s art department design some of the most beautiful covers I’ve ever seen.  And my editors, Helen Williams and Lucy Gilmour, are excellent (and very, very patient).

Are there only three books in the series? If so, what can we expect from you next?

I’m working on two more books – I’ve started a new Natalie and Rhys story, set in a Scottish castle. It’s the Christmas holidays, and Nat and Rhys have been invited to her friend Tarquin’s family castle. There’s a gruff, mysterious groundskeeper, a house guest who isn’t quite what she seems, and a family secret.

And Natalie has a secret of her own, one that might jeopardize her brand-new marriage to Rhys...

The other book is finished, but I’m adding in a subplot featuring a new character, an Anglo/Indian pop singer named Christa.  The plot centers on Gemma, who has a massive falling out with Dominic, and Jack Hawkins, the sexy arms dealer from Mansfield Lark.  It promises to be adventurous and fun.

As for a third book - I’ll probably revisit Holly and Jamie and see how they’re getting on.  Something from Jamie’s past comes back to haunt him.  And his mother turns up on Holly and Jamie’s doorstep for an extended visit, and she’s driving poor Holly crazy...

Thanks for visiting, Katie, and good luck with your future writing!

I was born in and have lived in the area all of my life.  I have two sons, both grown.  When they left home, I decided to seriously pursue my dream to write.  I love romantic comedy and chick lit, so I chose to specialize in those genres.  I wrote in the evenings and weekends (I still work full time) until I completed two books.  I’m also an active blogger.

I’m currently represented by the Holloway Literary Agency and recently sold my first three books to Carina , a division of Harlequin .

I love to write, and I love it even more when readers tell me how much they enjoy my books!

Gemma Astley has succeeded where so many others have failed. She has somehow managed to tame tearaway rock star Dominic Heath and stop his womanising ways for good. But just as they find happiness, Dominic’s secret aristocratic past becomes public knowledge, and everything changes…not necessarily for the better.

Dominic is actually Rupert Locksley, heir of Mansfield Hall, a crumbling stately home that needs major financial investment to save it from ruin. Dominic’s mother pleads for his help, but his father, the earl, is on the verge of disinheriting him. Meanwhile, Dominic’s new status as ’s long-lost heir attracts the attention of cut-throat gold-digger, socialite Bibi Matchington-Alcester, who means to make him hers at any cost.

Gemma and Dominic will need to test the strength of their foundations – as well as those of Mansfield Hall – if either are to remain standing.