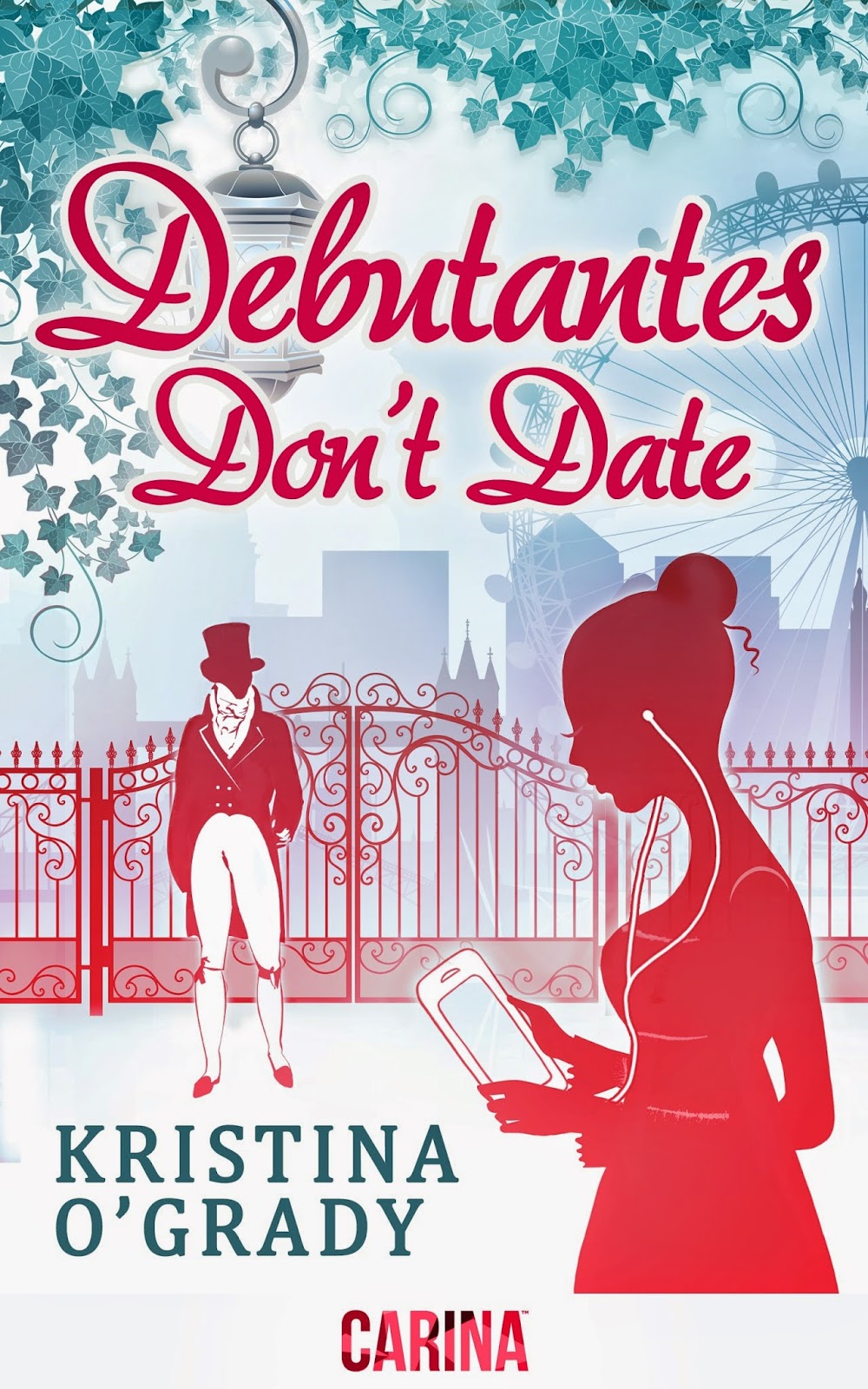 Hello Kristina  - and can I just say, first of all, how much I LOVE the cover to your time-travel novel (blurb below)! It's great having you here!

Hi Samantha, thank you so much for having me!  I'm so excited to be here.

Debutantes Don’t Date looks like a fantastic story. It is similar to Doubting Abbey in that my heroine, Gemma, is thrust into an aristocratic atmosphere and has to adapt quickly – it sounds like Grace has to do the same! I’m assuming the book is comedic? Gemma from DA certainly gets herself into some funny situations, when trying to fit in.

You are right to think that our novels hold a common theme and even although they are set in different times they are both about a heroine trying to fit into a situation she never expected to find herself in.  I wrote Debutantes Don't Date with fun in mind and although I wouldn't consider it to be a comedy per say, there is some comedic moments in it as Grace attempts to 'find her feet' in the 1800's.
What appealed to you about writing within the Regency Period?
The very first romance novel I ever picked up was set in the Regency period and since then I have always had a soft spot for that time.  I love the romantic feel of the era with the elegant dresses and the grand homes.
Are you a fan of period dramas?
I am.  I love getting sucked into the past.
I can’t imagine having to live as anything but a modern woman – how do you think you would fit into an aristocratic lifestyle?
The love the idea of travelling back in time but I think the reality of living in the past would soon loose it's shine.  I am too attached to my modern luxuries like running water and flush toilets. But I imagine I would have the toughest time in winter without proper heating. Brrr.
Describe Grace in three words.
Driven, short, klutz.
How hot is the hero, the Earl of Bingham?!
Super hot!  As all heroes should be. ;)
Tell me a little bit about yourself – how long have you been writing?
Lets see, I was born in Canada, I worked as an Environmental Consultant before meeting my husband and moving down to New Zealand.  We have three youngish children and live on a sheep and beef farm in sunny Hawke's Bay.
I have been writing for a long time, since for as long as I can remember really, but nothing serious until about six years ago.  It was then that a story grabbed me and I decided to give writing a novel a go.  It wasn't as easy as I thought it would be and when I had written myself into several corners I decided to try something fun and romantic instead. That novel turned into Debutantes Don't Date. I must say it was so fun writing romance that now I can't stop!
Is there another book in the pipeline – can readers look forward to a sequel or is everything tied up neatly at the end of this one?
Well.....things are tied up neatly at the end of Debutantes Don't Date...or are they?  Let's just say in the next book you might find out something else about Grace and Jasper, but the next book is not about them.

Thank you again Samantha.  It was great 'chatting' with you.

Find out more about Kristina here.

Buy her book on AmazonUK here.

One minute Grace Lancaster is an overworked event manager organising 2013’s New Year’s Eve ball… The next she’s kissing a rather gorgeous man at the Regency themed party. Everyone’s entitled to an out-of-character New Year’s kiss, right? Except Jasper Mossman, Earl of Bingham, isn’t at a costume party - he’s a real-life gentleman from 1813...
And, it seems, kissing a man in Regency London has consequences!
What Grace considers normal behaviour scandalises Regency society and so far she’s provided the irrepressible gossips of the ton with a season’s worth of conversation! In a scramble to protect her reputation, as well as his own, Jasper insists that they marry for the sake of her honour. Marrying Mr Darcy might be a 21st century girl’s dream – but the reality is far from romantic. Corsets are uncomfortable, no running water is disastrous! Grace had always planned on falling in love before she got married, but when Jasper takes her in his arms she just might believe she’s finally found her very own Prince Charming.